Ban toxic productivity by changing the way you speak 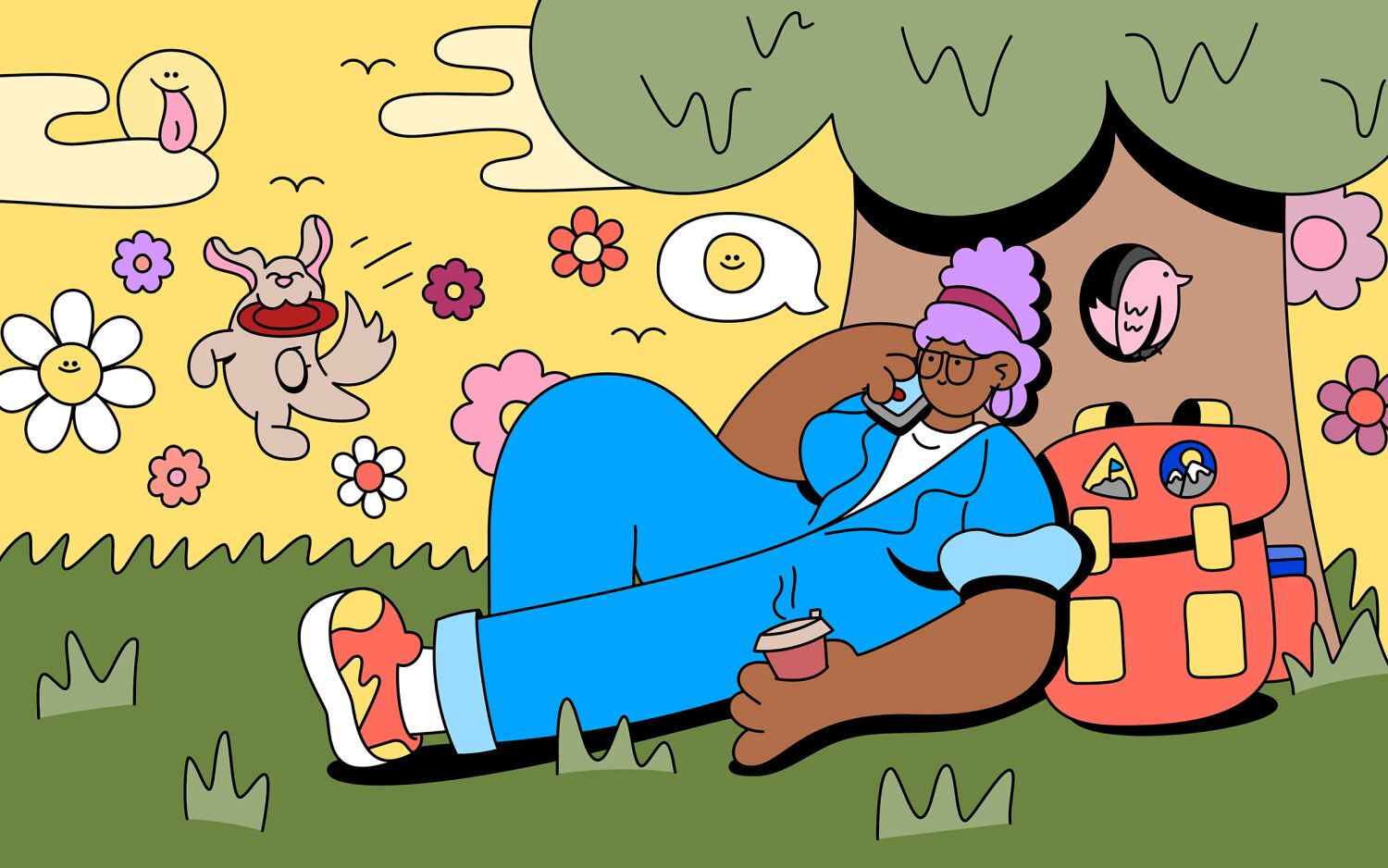 I have noticed a problem with some of the things I have been saying. Recently, when a friend texted to ask if I wanted to “grab a quick bite,” I replied, “Sure!” What I didn’t say was, “Actually, I’d rather stay as long as we like while we savor our meals.” When it’s time to pick up some items at the store, I don’t announce, “I’m going shopping,” but “I have to run a quick errand.” And I’m always “jumping” or “jumping” into the shower (a potentially dangerous act, if I’m being honest with myself).

In a culture where doing-doing-doing feels like the constant and never-ending goal – and our mental and physical health suffers therefore, it’s time to start questioning how much our words have to do with it. In fact, language and mental health experts encourage us to slow down and think about what we’re saying. But how do you begin to change the phrasing that is so ingrained in your daily life?

Almost all of these phrases originated in the 20th century, says the lexicographer and author Corey Stamper, although they have really taken off since the 1980s. Fascinatingly, he discovered that “jumping the phone” started in the 1920s (used in the business world); In the early 1940s, it was used to talk about a meal in the middle of a working day; and “jump / jump in the shower” dates back to the 1970s, “although in 1940 we did a ‘jump in the tub’ and ‘having to run’ has been an excuse to get out of a conversation because the rigors of your daily call since the 1870s.”

Even if the phrases aren’t work-related (such as “grab a bite” in current usage), they’re tied to the idea of ​​time constraints and not bothering someone else, Stamper says. “If you say you’re going to grab a quick bite and then go back to XYZ, you’re assuring whoever is listening that eating your lunch is just a momentary interruption of your day. Take it outside of the workplace and it has a casual opening: if I ask someone I’m interested in if they want to ‘have a bite,’ that’s less intimidating or intense than asking them if they want to ‘have it.’ dinner.'”

Of course, it’s less scary to be asked for a minute of the day than the whole day. But in the context of the culture of hustle, what if that language also promotes the idea that we need to do more, faster, to make our own lives worthwhile, and fit in things like errands or fun times so as soon as possible “It’s about life sticking to a strict schedule and agreeing to stick to it,” says Stamper.

Okay, but the weather is real

“We they are very little time,” he says Nedra Glover Tawwab, licensed therapist and New York Times bestselling author (her latest book, “Drama Free,” comes out in February). “Time prioritization has always been a thing for humans, and because we’re aware of, ‘Oh, my God, I’ve got to do laundry, I’ve got to cook, I want to prepare meals and I want to exercise and I’m thirsty. people, “and all the things we have to do, we try to save time by reducing our time where it really matters.”

Author and linguist Amanda Montell agrees: “You have to be in shape to take a really quick shower when you’re like, ‘I’m going to jump in the shower.’ It’s like you’re assuring everyone and yourself, ‘This is only going to take five minutes.’ I swear I’ll be in the office soon.'” (Although if you’re taking a quick shower to save water during California’s prolonged drought, the phrase may take on a more crucial, literal meaning. But, really, don’t) . t in reality jump.)

We rush through the less interesting things

Not only are we busy, but we are also aware that some activities are not as exciting or desirable as others. Montell says we often downplay time-consuming activities to make them seem more enjoyable, which may have spilled over into the way we talk in the workplace. “It reminds me of the corporate bulls—the language, like, ‘Can we just make a call?'” that reflects the general culture of toxic productivity in the States, he says. “You know, it’s almost cartoonish, like ‘get on the phone’ – am I a rabbit in a business movie? Or ‘stick your head in my office,’ ‘come into my office.’ It’s trying soften the fact that much of what happens in the workplace is heavy or really taxing or tedious work.”

Sure, running errands can be boring enough to want to get them done as quickly as possible, but why do we linguistically streamline phone calls and dinners with friends? It has become something we all say without thinking. Montell, who wrote the book “Cultish: The Language of Fanatism,” says, “I think that language is used to emotionally distance yourself from what’s going on.” And not having to think too critically about it; that’s what cultured language does. It allows you to mask a truth or mask the reality that there is no truth under a buzzword or a piece of us-versus-them terminology. It discourages individuality and backsliding. “

If the world we live in doesn’t value spending a day with a friend, a phrase that downplays the experience is developed to prove it. And when everyone around you says things like “take a bite” or “jump on the phone,” you don’t stop to question the ideology behind it, Montell explains. “I absolutely believe that the language we use can insidiously embed dogma in our minds. Especially if it’s language we’ve always grown up using organically and taken for granted.”

So what do I say instead?

Tawwab suggests changing our language to focus on being together for any length of time. “We’ll have Sunday together, or we’ll go eat something. Not a quick bite, but let’s have dinner. There’s no time limit, it could be two hours, it could be five.” Channel your younger self and see where that takes you. “I think this is something we had time for as teenagers and, definitely in younger adulthood,” she adds. “I remember having trouble staying out of curfew and I wasn’t doing anything but hanging out with my friends.”

2. Consider the beauty of doing nothing

It’s worth thinking about what you find beautiful in your life. And, if whatever you’re doing is something you minimize in your language, maybe you don’t want to do it at all?

3. Notice your rushed language and when others rush you

Tawwab talks about the friend who talks to you on the phone and then says, “Okay, let me go, I know you’re on your way to work.” “I’m like, I haven’t started it, and I’m the person on my way to work,” she says. Why do we do this? “Maybe it’s about keeping people from being late or not wanting them to finish first or, you know, trying to be mindful of their time,” he says. This isn’t necessarily a bad thing, but it adds to the whole social busyness trap that keeps us revving our engines and running errands. “I’ll have people say, ‘Oh, I’m not calling you because I just know you’re so busy,'” Tawwab says. “I’m like, ‘I’ve seen all these Christmas movies my whole life, so you’re giving a lot of fun with this whole” you’re too busy “thing”.

“There’s something meditative about noticing yourself intentionally hurrying and slowing down because you don’t really need to hurry,” says Tawwab. “When we catch ourselves using some of these phrases, like “Quick shower,” “run,” “really quick,” “just a minute,” try checking in with yourself and say, “Wow, there I go again, trying to speed up.” Let me slow down.” “He also suggests engaging in practices like watching your coffee being brewed or intentionally making a cup of tea and being in the process instead of thinking, ‘Okay, while this coffee is being brewed, I could go here and do this and that.”

As you slow down, think about the words you use: “I don’t want to tell anyone how to use language, but I think it’s healthy to reflect on why we use the language we do and empower people to think, ‘Language “Does what I wear really reflect what I believe and who I want to be? Or am I just saying it because that’s what it’s always been said?'” says Montell.

5. Embrace that language is change

If one thing is certain, it is that language continues to evolve. And through our words we can also change the culture in which we live. “The theory of linguistic performativity says that language does not only reflect reality. It creates reality,” says Montell. “Every time you say a word or even write a word, it causes real action or real, measurable change in the world.”

Indeed, Tawwab says that lately he has seen more language of “ease and flow” (ser conscious, simplifying and not forcing things) emerging. “I feel like there’s still going to be a braking revolution,” he says.

So let’s all say it together: “Want to hang out while we like this weekend?”