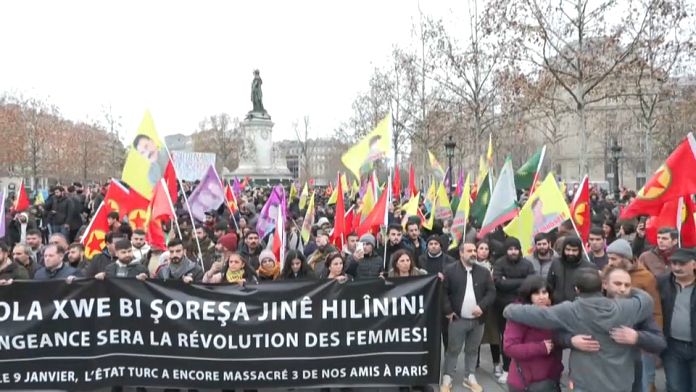 Kurdish activists, left-wing politicians and anti-racist groups rallied in Paris on Saturday after three people were killed at a Kurdish cultural center in an attack that prosecutors say was racially motivated.

The shooting, in a bustling neighborhood in central Paris, also injured three people and has raised concerns about hate crimes against minority groups. It comes at a time when far-right voices have gained prominence in France and across Europe in recent years.

The alleged assailant was injured and is in custody. He is a 69-year-old Parisian who was accused last year of attacking migrants and was released earlier this month. Prosecutors in Paris said he could face charges of murder and attempted murder on racist grounds.

Thousands of people gathered in the Place de la République in eastern Paris on Saturday, waving a colorful spectrum of flags representing Kurdish rights groups, political parties and other causes. The gathering was largely peaceful, until some youths threw projectiles and clashed with police firing tear gas.