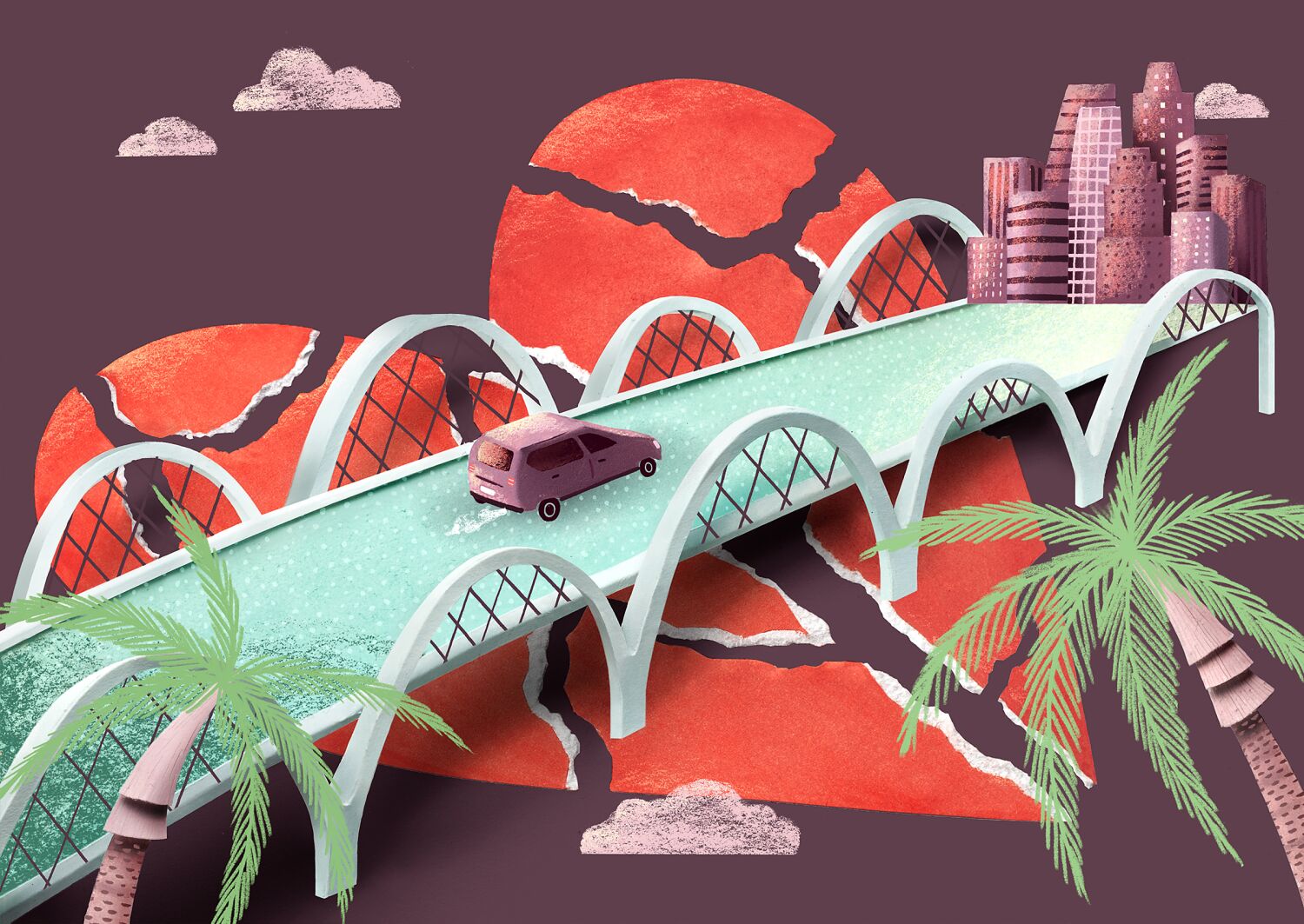 It was over as quickly as it began.

On that cold Saturday in October, I was over the moon after our second seven-hour date, the sequel to our five-hour first. We drove up the Pacific Coast Highway, or “the PCH,” as he said in his northern British accent. His personality reminded me a bit of my father’s, bright, thoughtful, determined, but with a perverse and sexy edge all his own.

Cuddled in the backseat of his Jeep, my head was against his chest, his arms around me. I smiled as the wind whistled through the grass near Point Mugu. For the first time with a man, my brain wasn’t full of chatter and anxieties. He couldn’t remember the last time he was this quiet.

The next day, I went on my weekly visit to my father at the Motion Picture Home in Woodland Hills. Dad and I have always been close. It’s quirky yet peaceful, full of old LA stories that paint the city with magic. I am also his primary caregiver, taking him to appointments and advocating for him when needed. It’s my payment to him for being the only one who could reach me with love, compassion and empathy when I was an out-of-control teenager.

I hinted at the existence of this new man as dad is too worried about my love life. I told him I really liked him, but kept calm as this was new.

On Monday, a family emergency meant that all of this new man’s future plans, the ones he told me about on our dates, had completely changed. Whether he was coming back to the UK, whether temporary or permanent, was yet to be seen, but it wasn’t fair to put up with everything up in the air.

You can’t blame a man for doing the right thing in dating, no matter how much pain it causes. But I’d never had a relationship that ended with “life happens,” or that promising, anyway.

I cried until my head hurt, my body glued to the bed as I watched “Gravity Falls” and “Big Hero 6” while the food I ate turned to ash in my mouth. Talking to my friends about him and what happened, their reactions were mixed. Some looked at him with a questioning eyebrow, a fair response given the betrayal of dating. Others swooned, saying they were sure he would come back to me, which led me to raise an eyebrow at them, due to my utter lack of luck in the world of romance.

But the only person he hadn’t told was his father.

The following Sunday, I went to run errands with him and possibly go for a walk. After loading Dad into the passenger seat and his walker into the back of my CR-V, we were off. I apologized for not calling him as this week had been bad.

“What happened?” he asked.

I didn’t know where to start. The week was full of other setbacks besides heartbreak. But with these, I’m quite capable of fixing them quickly and moving on; this was the one thing he couldn’t control, the thing he craved the most.

After our errands, I asked him what he wanted to do. After a few minutes of thought, Dad said, “You know, I haven’t seen the 6th Street Bridge yet.” I’m always on an adventure downtown, so I put on the oldies playlist I made for him and ran to I-5.

We talked about my work and the upcoming elections. He worked on throat exercises to strengthen his vocal cords, the car filled with loud “Aaaaaa eeeee ahhhh ooooooohs” and laughter. Dad told me about playing poker and his new friends, although he hadn’t been able to retrieve his copy of Everything Everywhere All At Once from one of them.

Finally, in the calm of the exit to Boyle Heights, I worked up the courage. “Dad, remember I told you last week that I was starting to see someone?” I said

He nodded. I explained everything. The first five-hour date. The second of seven hours. The family emergency. How intelligent, generous and respectful he was. How she felt like my mirror, equal in our commonalities as she reflected back to me how I wanted to be in the world. confident brave Play. beautiful

I swallowed Dad knows me too well, especially since falling in love with someone like that doesn’t happen to me. For the first time in my dating life, I was sure of my feelings for a man right from the start. However, my future with him may not happen, and I had to accept that.

As Jackie DeShannon sang about the world needing love, we crossed the 6th Street Bridge, downtown perfectly framed. I drove slowly, savoring the view, my eyes trying to catch the awe on my father’s face as we drove through this new architectural wonder of Los Angeles.

We then headed to Philippe’s where we were blessed with not only perfect parking but a short line to get French sandwiches. As I watched Dad devour his with overwhelming glee as his feet hit the sawdust floor, I realized that this was the first time since Monday that he had experienced joy.

Even though I am the caretaker now, my father still found ways to take care of me. Like my angst-filled teenage self, I needed to be pulled out of heartbreak with compassion, empathy, and love. Who better to do it than the person who did it first?

We slowly made our way back, strolling through Chinatown and Elysian Park, singing “Peggy Sue” and “Can’t Buy Me Love” with panoramic views of Dodger Stadium and the skyscrapers. It may not be the Pacific with the man who stole my heart, but at least I shared it with someone I love.

The author is a screenwriter and freelance writer in Los Angeles. She is on Instagram: @reinavictoria

LA Affairs chronicles the pursuit of romantic love in all its glorious expressions in the LA area, and we want to hear your true story. We pay $300 for a published essay. Email LAAffairs@latimes.com. Shipping guidelines can be found here. Previous columns can be found here.