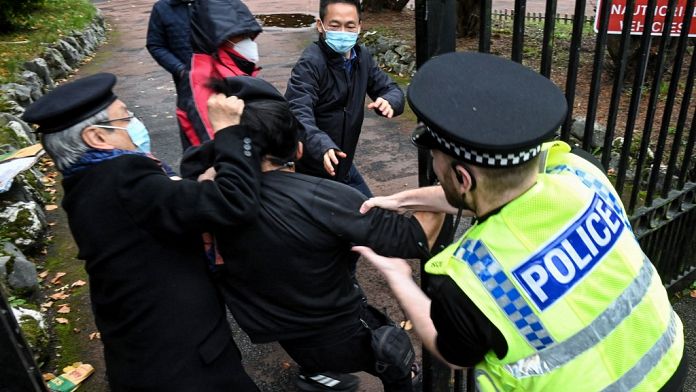 China’s government has withdrawn six UK diplomats after a Hong Kong pro-democracy protester was attacked on the grounds of the Chinese consulate.

UK Foreign Secretary James Cleverly confirmed on Wednesday that a Chinese consul general and five members of his staff would be leaving the country.

All six were involved in the assault of protester Bob Chen, who took place in October at the Chinese Consulate in Manchester.

Chen claims masked men dragged him onto the consulate grounds during a peaceful protest and beat him.

Police officers at the scene had to intervene and remove Chen, who suffered injuries to his face and back.

“The violence at the Chinese consulate in Manchester was unacceptable,” Cleverly said he wrote on Twitter.

“Six Chinese consulate officials, including the consul general, are being withdrawn from the UK following the disgraceful incident in October,” he added.

He smartly said the Foreign Office had asked Beijing to waive diplomatic immunity for the six officials to allow investigating British police to question them. But this was rejected.

“I am disappointed that these people are not being interviewed or facing justice,” Cleverly added.

“However, it is right that those responsible for the shameful scenes in Manchester are no longer – or will soon cease to be – accredited consular staff in the UK.”

The Manchester incident raised tensions between London and Beijing as British Prime Minister Rishi Sunak declared the “golden age” of diplomatic relations was over.

China’s foreign ministry has maintained that Chen had entered the consulate illegally and that Chinese diplomatic staff had the right to maintain security at its premises.